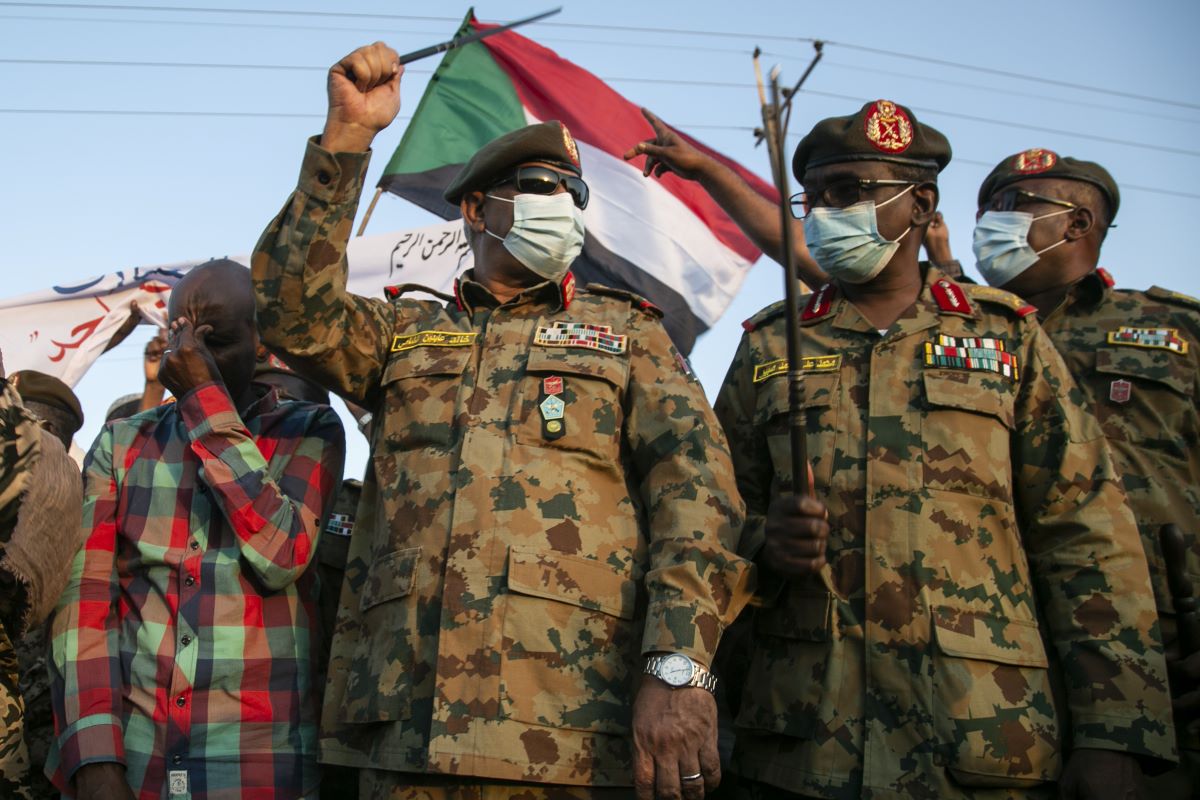 Sudan have reportedly taken control of the Al Fashaga triangle, an area of 250km² fertile farm land, located in the eastern El Gedaref region on the border between Sudan and Ethiopia.  When the war in Tigray started on 4th November some Ethiopian army units in the Al Fashaga triangle abandoned their bases, and the Sudanese moved in. There was an attempt by Amhara militia to re-capture the area last Saturday (12 December), leading to clashes with the Sudanese, who have reinforced their positions. Local farmers swear they will never give up the territory. But how did the dispute begin?

Brief historical evolution of the territory and border demarcation

The recent history of the Ethio-Sudan boundary can be traced to 1882 when Egypt took full control of the present territory of Sudan and started to expand its boundary eastward in order to have full control of the headwaters of the Nile. Egypt’s survival depends upon the waters of the Nile and the fear of a European or African power (Ethiopia) taking full control of the Nile’s headwaters and undertaking a major development project which would have a permanent impact on the flow of the Nile has always been a principal national concern of Egypt. The importance of the strategy was made clear early in the mid-1880s as the following statement by Samuel Baker in 1884 illustrates. Emphasising the danger of an unfriendly government controlling the Nile basin, Baker noted that ‘a hostile power could readily dam the Upper Nile, starve Egypt of water and destroy the country’ (cited in Langer 1950).

In 1898 England took full control of Sudan and created Anglo-Egyptian Sudan. As an inheritor of the territories under Egyptian control, England continued to promote the principal Egyptian national policy – maintaining full control of the territories of the headwaters of the Nile. England was particularly concerned about competing European powers (France, Italy and Germany) exercising their influence in the region.

At this time, the ‘scramble for Africa’ (concocted in 1855) was at its peak and the major European powers were jockeying to establish major spheres of influence in the region as well as in the rest of Africa. In 1891, Britain and Italy divided East Africa into spheres of influence with 35°E longitude as the dividing line and Ethiopia relegated to the Italian side. In the same year, Menelik, concerned about his country, dispatched his warning letter to European powers affirming his determination to defend his territory at any cost. Menelik was very clear in defining the territorial extent of his land, and his claim of the territory adjacent to Sudan extended from Tomat in the north to Gedaref in the west and the junction of the White Nile and the Sobat, to Lake Samburu/Turkana in the south.

The British, who were in full control of the Egyptian-Sudan territory by this time, were not willing to accept Menelik’s claim; rather they were more interested in negotiating to define the location of the boundary line between Anglo-Egyptian Sudan and Ethiopia. The various agreements on the border executed between 1900 and 1907 were the result of intense diplomatic manoeuvrings between England, Italy and Ethiopia.6 Among the many agreements, the 1900, 1901, 1902 and 1907 treaties are particularly relevant in defining the Ethio-Sudan boundary. A brief analysis of these treaties is outlined below.

The Treaty of 10 July 1900 between Italy and the Ethiopian government delineated the boundary between Eritrea and Ethiopia. The delineation line known as the Tomat–Todluc–Mareb–Muna line (the straight line between Tomat and Todluc shown in Figure 2) was recognised by the two governments as the boundary between Ethiopia and Eritrea. 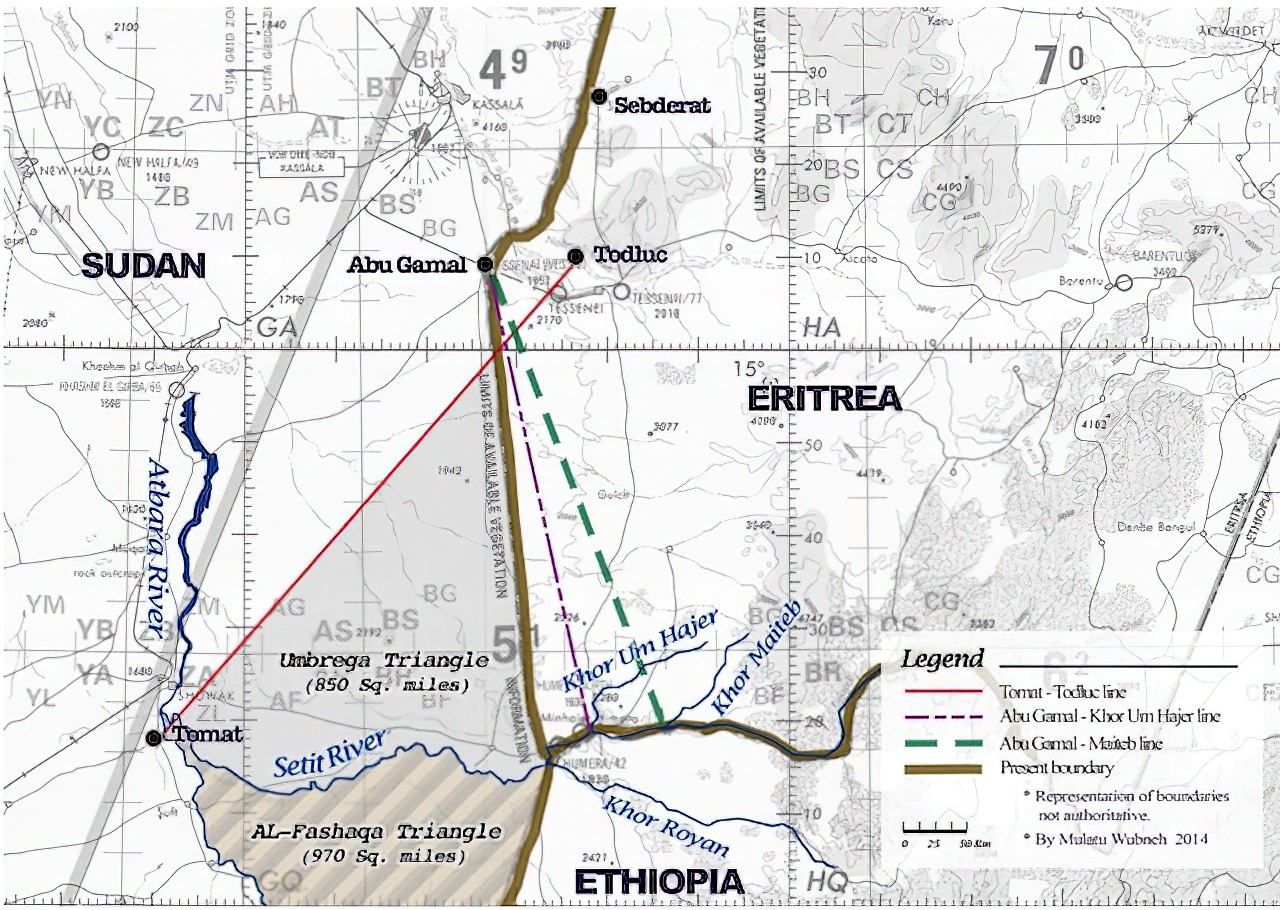 The confidential Declaration of 22 November 1901 between Britain and Italy defined the boundary between Eritrea and Sudan. The declaration states that a line shall be drawn from Abu Gamal to the junction of Khor Um Hajer with the Setit River (see Figure 2). The area to the west of this line shall be ceded to the Sudan and to the east of the line to Eritrea. The report by Woldemariam et al. (1981) maintains that Menelik was to be compensated in the area from Tomat to Um Hajer for the territory he lost as a result of the new line drawn by the 1901 Declaration. The matter was to be discussed in a second meeting in Rome which never took place.

The initial plan of the 1901 Declaration was to draw the line from Abu Gamal to the junction of Khor Maiteb. This plan was rejected by Italy because the plan would have included the Kunama people into the Sudan. If, on the other hand, the 1900 Treaty was to be honoured, the Hamran, a very important tribal group in the Sudan, would have been incorporated into Ethiopia, and this would not be acceptable to the British. There was a diplomatic logjam; and the problem had to eventually be resolved in a secret meeting in Rome in 1901. All-important diplomatic players: on the Italian side: Martini, Ciccodicola and two colonial officers (G. Agnesa and A. Bodrero); on the British side: Rodd, Harrington and Glichen were at the meeting. Ethiopia, the country with a major stake in the decision, was kept in the dark.

The 1901 Declaration statement states that ‘a line shall be drawn from Abu Gamal … in a southerly direction as far as the junction of the Khor Um Hajer with the River Setit … ’, but how the line should proceed beyond the intersection with the Tomat–Todluc line is not clear as there was no map attached to the treaty. The confusion developed because Ethiopia interprets this as a ‘directional line’, whereas Sudan believes that the statement is meant to indicate a ‘direct line’ up to the River Setit. Sudan also believes that the 1901 Declaration problem was addressed in the addendum to the 1902 Treaty (see section on addendum); to which Ethiopia counters by stating that the 1902 Addendum does not specifically abrogate the November 1901 agreement, and therefore, its claims on the Umbrega and Al-Fashaqa Triangles still stand.

Addendum to the 1902 Treaty

The addendum to the 1902 Treaty is one of the critical components of the 1902 Treaty that modified the 1900 and 1901 agreements, thereby changing Menelik’s boundary line from Tomat–Todluc to the junction of Khor Um Hajer and Setit River and continuing to Khor Maiteb (Figure 2). It also made the previous agreements Menelik had with Britain and Italy null and void. By accepting the 1902 Annex, Menelik was not only outfoxed to abandon his claim of his boundary starting from Tomat but was also bamboozled into recognising a condition that completely removed him from claiming any territory north of the Setit River, specifically, the area known as the Umbrega Triangle. Why did Menelik abandon his earlier position of the Tomat–Todluc line constituting his western boundary?

It is very difficult to come up with a direct answer to this question since there is very little record maintained from the Ethiopian side to give us Menelik’s rationale for changing his position; however, there are some evidences, based on British and Italian records, that suggest that the British were putting pressure on Menelik, including the use of ultimatums to force him to accept their new proposal. The nature of this pressure included reversing Britain’s position on recognising Tomat as the western point of Menelik’s boundary (Rennel Rodd had proposed that Ethiopia’s western border could start from Tomat in exchange for Menelik’s alliance and cooperation against the Dervish); making ultimatums on controlling the entire Nile basin11; blackmailing him on violating the ‘spirit of friendship’ between Ethiopia and Britain established following Rodd’s visit12; and disregarding claims on territories that Menelik controlled but did not have permanent camps in, which the British regarded as areas with ‘no effective control (Woldemariam 1981, 29–30; Wondwossen 2009, 347).