The Sidama’s 2022 New Year ‘Fichchee’ Coldly Celebrated Globally and In Reoccupied Sidama Land Whilst The Empire Is Heading Towards Its Inevitable Disintegration. THE HAMAR OF SOUTHWEST ETHIOPIA AND THEIR CATTLE

he Hamar of southern Ethiopia not only gain a living from their cattle, but they ...read more 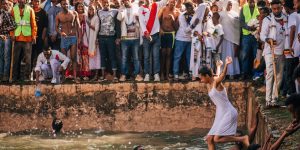 THE FESTIVAL OF TIMQAT, ETHIOPIAN EPIPHANY

he festival of Timqat (Ethiopian Epiphany) is the biggest and most fascinating annual holiday celebration ...read more