This article attempts to briefly narrate the tragic, catastrophic and fantastic end of the TPLF cabal’s ruthless dynasty of 30 years.

By The Queen of Sheba

The conflict in the Tigray region has dramatically receded with such a pace that surprised and shocked both friends and foes alike. A transitional government has been installed. Local leaders have been openly and freely chosen. Command posts for security are being established. Electricity, water and communication are now back into service. And more.

It is however true that problems remain, but they are not insurmountable with time, peace and security. The capture of the cabal leaders will most certainly contribute towards that end.

I was on the phone the other day with a relative mourning a recent loss of a close family member. The conversation however quickly descended into the hot political story of the day and I quickly flung a question: “What did you think of the capture of Aboy Sibhet and others?” The grieving relative responded, “First, I did not believe it was true; I thought it was fake. But then when I realized it was true, I cried with tears streaming down my cheeks.” and added “I am sorry, but that is what I felt at the time despite all what he and they had done. I wish he was dead and we did not need to witness this heart-breaking scene of a broken old man dragged out of caves in such a dramatic manner.” As I was listening the response, I got confronted with empathy, compassion, love, hate, and more.

As the late spoke person of the cabal, who was killed during one of the latest operations, triumphantly, but way too prematurely, admitted, the Ethiopian National Defence Forces of the Northern Command was heinously and cowardly attacked with a “thunderous” speed—while asleep. The tragic scene of this conflict involved hundreds of thousands of army personnel, special forces and militia from multiple zonal regions of the country. In this, so called “thunderous” attack, quite a huge number of young and underaged boys and girls were forced into it by the cabal—serving as cannon fodders. The indelible pictures of the—young and aging—who got captured and injured during the conflict will remain as yet another vivid reminder of the ruthlessness of the cabal which violently—and wickedly—ruled the country for nearly 30 years. With another surprising figures he went on: “At Defense Headquarters, 80 percent of the high-level officers are from Tigray. The numbers I mentioned earlier were relatively less critical because even if there were many Amhara or Oromo generals, the real power remained with this 80 percent. What does this mean? These officers know the kinds of weapons available in the defense force. They know the available training and the communication lines. Everything was in their hands.”

The iniquitous scandal is that Tigrayans make up only about 6 per cent of the 110 million population in Ethiopia. Yes, only 6 per cent!

Reasons abound why the cabal miscalculated the outcome of the conflict—which primarily includes the massively disproportionate composition of Tigrayans in the army and the intelligence. The second one was the hugely lop-sided firepower of the Northern Command hosted in Tigray which they orchestrated its blockage from moving out of Tigray, in anticipation of this treasonous act. The third one was an overreliance on their stooges and operatives across the country and beyond to do their violent bids during the take over. One could also add that the cabal was blindsided by the action of the Prime Minister in modernizing the army’s capabilities without their knowledge.

In a miscalculation of colossal proportion, absolute confidence of a ‘thunderous’ triumph—and anticipated impunity from the international community through their paid operatives and shenanigans, the cabal forces slaughtered the army—ruthlessly, callously—and cowardly. The climax of the heinous crime reached its peak as the cabal forces mercilessly massacred unarmed civilians in MyKadra as the they got the first taste of a devastating defeat on the battle field.

The cabal also miscalculated that, once the Northern Command was attacked and dismantled, the entire federal army would simply collapse—along ethnic lines which it has relentlessly and forcefully drawn during its tenure. To the contrary, the entire army stood with resolve and fought with incredible bravery in retribution of their comrade-in-arms who were executed while in their camps—and in their sleep.

The turn of events was so dramatic that the cabal forces were trashed in such a dizzying speed that they fled in a humiliating defeat. Hundreds and thousands of the cabal forces either surrendered or taken prisoners as the entire scheme of the putsch failed catastrophically. The cabal forces were trounced from a highly sophisticated situation room in Addis Ababa coordinating reconnaissance and attack drones which they wrongly attributed to foreign powers.

In an unprecedented media blitz, the perpetrators were presented as victims enabled by well-oiled operatives, shenanigans, and party loyalists. The subversion of diaspora party loyalists and those based in major international organizations and media was obscenely evident.

However, most of these highly coordinated multi-pronged cabal attacks miserably flopped from saving the barbaric cabal from a catastrophic fatality.

At the time of this writing, a number of former high-ranking officials led by the founders of the cabal and former presidents of the region, were hoarded and roared back on a plane to Addis Ababa in a very dramatic—and historic—manner.

The pulling of the cabal leader—and his dejected entourage—from extremely treacherous hideouts in caves, ravines, and gorges fantastically culminates the era of a brutish dynasty whose greed and arrogance had been unparalleled. It’s however, hugely tragic to witness the hideous war mongers walking in chains while the bodies of their young foot soldiers—who had a lot to live for—are crumbling in those perilous terrains.

In the demise of the cabal, the Ethiopian government, and particularly the army and the police have exhibited an outstanding discipline not only in conducting the operations, but also handling their staunchest enemies who attacked and slaughtered them. Kudos to the army—and its gallant leaders—who have shown exceptional discipline and professionalism.

It is extremely agonizing to contemplate the liquidation of a large contingent of the cabal forces by the army before the spiteful leaders were taken to custody in their cowardly hideouts. These wicked killers on their waning days, who survived on the demise of the young, should have known—and done—better than submitting themselves. For sure, they were not worrying about a sin, if they contemplated a suicide. Well, instead of reading from the books of Saddam Hussein and Muammar al-Gaddafi, they should have consulted at home with Emperor Tewodros.

So much for the phony account of bravery and heroism of the cabal which had been incessantly unleashed for 30 years.

In his address to parliament Prime Minister Abiy lamented: “The politics of retribution has never helped us. Every time a new government is installed, we start from scratch and this has left Ethiopia in backward state. So, we opted to take the path of forgiveness and reconciliation.”

Forgiveness and reconciliation are proposals only to those with a heart to tango. But then it needed two to tango.

I would not curse the erstwhile cabal for snubbing the tango. t is just unbelievable for any sovereign country could write something like this, while it’s ...read more 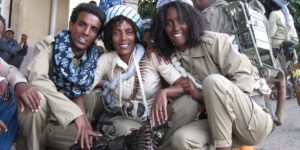 he TPLF Junta, which has routinely disturbed Ethiopia and Ethiopians, disturbed their unity and solidarity, ...read more