In southern nations, nationalities and peoples region, Kambata Tembaro zone, Hadero and Tuntu woreda, Masam village was inaugurated by the federal and regional leaders.
According to Mr. Birhanu Kebede, the general administrator of Kembata Tembaro Zone, Hadero Tuntu, the Gombolozo Small Irrigation Project has been built since 2012. 65 hectares of land is being developed since the 19th century and vegetables, fruits and wheat are also being developed.
The administrator stated that 219 families are benefiting from the participatory small irrigation development program in Lemaw Gombolozo and 120 families have graduated as models. The chief administrator said that the program is being completed by giving women agricultural equipment, financial support and professional assistance.
The Minister of Natural Resources Development representing Daetown, Mr. Elias Awol, the Executive of Small Irrigation Expansion, also stated that providing irrigation water is important to get rid of the dependence of rain, the contribution of the Gombolozo Small Irrigation District is huge in increasing the production and efficiency of the district. Women who have benefited from the small participatory irrigation program said that they had been under work pressure and their husbands had not found them a job and now they have explained that their lives are changing through the program.
Finally, families that have played a role in the process of creating these model families were given recognition and awards. 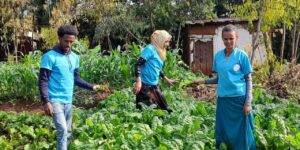 fforts to discuss with the elected people and give appropriate answers to the questions raised ...read more practical training on how to plant and use of animal feed is being given to ...read more