The long awaited speech by dictator Abiy Ahmed, was full of pork pies (lies). Let’s analyse the dictator’s pork pies. The COVID-19 pandemic and Abiy’s wars have particularly affected the tourism, air transport, hospitability and manufacturing sectors, understandably resulting in economic slowdown. The economy reportedly grew by 3.1% in 2021, compared to 8.4% in 2019.

The regime procedures and paperwork, continue to be bureaucratic and time-consuming. Thus, time and money is wasted  trying to get the government do the simplest task for you. With such a bureaucratic culture-like what the regime lobbyists tend to fool the world, Ethiopia can’t be one of the fastest growing economies in the world. But a poorly performing economy.

Foreign exchange shortages, largely the result of weak export performance and high demand for foreign currency, have presented difficulties for businesses in Ethiopia. Businesses have continued to face delays in foreign exchange supply, and this has resulted in slow-downs and down-time in manufacturing.

When UK imports from Ethiopia dropped by 6.9%, then you start understanding how bad the Ethiopian economy is performing. Indeed, Very poorly!

The loans injection to private companies, only benefited Abiy’s cronies, and not the entire business community. In fact, the business license increment to 10% was a big blow to small businesses and start-ups. Access to finance is a challenge for the Ethiopian local market. Local private banks often require a large percentage of loans as collateral, which must usually consist of cash, real estate or durable capital physically located in Ethiopia. The Development Bank of Ethiopia (DBE) should not be a bank for party functionaries or regime cronies, but for all Ethiopian entrepreneurs.

Of course, high inflation and chronic borrowing led to increase in commodity food prices, thus consumer confidence was at it’s lowest when compared to the last 5 years.

The economy has remained vulnerable to periodic droughts and commodity price volatility that impacts the demand and price of Ethiopia’s primary export commodities. The overhyped Great Ethiopian home coming was a big flop. Because Ethiopians weren’t in a hurry to visit a country that murders, displaces and rapes it citizens. The Ethiopian Muslim diaspora community, can’t enjoy Ramadan in a war and extrajudicial killings environment.
The concept of promoting an already national food such as Gorgora & Koisha is a sign of not understanding modern diners…we all know that good food does not require over marketing.
It’s good that, the dictator understands the culture of corruption within his administration-the procurement process should be monitored from the word go, as its where the biggest corruption takes place. When the government borrows from Multilateral Development Banks such as the World Bank for big projects, international tenders should not be left for god to be monitored. It’s the duty of the government to make a follow up on the Project Financing, as its where most money is stolen from.
Ethiopia needs a strong and sustained economic growth as a foundation to reduce poverty, and not doctored  speeches and reports.
The fate of political prisoners and prisoners of conscience, cannot be used as a scale for peace in Ethiopia, when the root cause of killings, rapes, plunder and displacements haven’t been addressed.
The genesis of the bloodbath in Ethiopia is something that all sides should accept responsibility for. The so called conflict among “brothers” is not true. It’s  about politicians fighting among themselves, for the national cake at the expense of ordinally Ethiopians.  Totally nothing to do with the populace, but political parasites using war & propaganda to exploit and humiliate the working class.
There can never be victory for Ethiopians when many are; dead, displaced, raped, and traumatised. The only semblance of a victory can be through Justice-the perpetrators of genocide, war crimes and crimes against humanity, should face justice. No war criminal should be rewarded.
If “Negotiation is a method of identifying problem-solving options”, then why has it led to the extermination of Ethiopians, and how do you negotiate with victims of your war mongering?? You cannot win a war by oppression and subjugation of Ethiopians. The Commissioners of the newly constituted National Dialogue Commission is a rubber stamp of the Prosperous Party criminal outfit. From the word go, one could see a collective of sycophants being imposed on the Ethiopian dialogue. How do you task your sycophants to come up with proposals, as if the problem is not known??
The failure to understand the political struggles of your opponents and labelling them terrorists, makes you a bad peace maker.
The political problems in Ethiopia, wont go away, when the Ethiopian Federalism is half baked and a dictatorial vehicle to drive agendas of a single political party, at the expense of Ethiopians. The lack of real political plurality in terms of the parties that control the various orders of government, also discourages proceedings related to federal aspects of the Constitution. The dictatorial vehicle cannot be taken to any court of Law in Ethiopia for abusing its powers, because it’s a clique of parasites that controls all aspects of the half baked Ethiopian Federation.
The deployment of killers to deal with political problems in Tigray, Afar, Amhara, Oromia, Somali, Benishangul-Gumuz, and Gambella is not a sign of a progressive federal system, but a politically bankrupt dictatorship.
Instead of having regional police answerable to the people of that region, you end up with a bunch of police thugs, answerable to the dictator in Addis Ababa, and implementing his corrupt and genocidal ideologies.
Ethiopia Autonomous Media

Prime Minister, Abiy Ahmed has addressed the Parliament today. He has covered a lot of issues. Here are some of the most important ones:
Economy:
****
The economic progress in the last six months should be weighed in light of the operation in the North, droughts and floods, as well as impacts of COVID. Significant macroeconomic measures are required to close the budget imbalance.
When our exports exceed our imports, our country benefits. Banks’ net value, which was ETB 1.8 trillion six months ago, has increased by ETB 2 trillion, while stakeholders’ wealth has increased as well. Over the last six months, loans to private investors have improved.
Foreign direct investment has surged by 23% in the last six months. The number of business licenses increased by 10%, with 8% of renewing already existing business licenses. Our systems, however, need to be upgraded and modernized.
Inflation:
****
Food commodities, various causes Population, stockpiles, and consumer risk
We need to encourage family planning, take steps to prevent businesses from stockpiling key commodities, and boost consumer confidence while seeking to keep costs down.
Agriculture:
****
Cluster farming is a productive and profitable method of mechanized farming that has to be widely adopted by our farmers.
Industry:
****
Encouragement of indigenous production and reduction of imports should continue to be emphasized in the industry.
Great Ethiopian Home coming
****
It has yielded encouraging outcomes as a result of the contribution by the diaspora. We call up on Muslim diaspora to return home for Ramadan and continue their contributions.
Developing our lakes:
****
From the Dine for Ethiopia project, Gorgora & Koisha will be completed this year, with the exception of Wonchi. Once we complete these, others will begin.
Corruption:
****
As far as we’ve come in terms of enhancing environmental ergonomics & ICT in government agencies, we still have a long way to go in terms of preventing corruption. Investigative journalism is encouraged. We are also performing evaluations.
The Reform Process:
****
Reform is a process that needs time even in top government structures. In all of this, it is promising to have Ethiopians who work even during the night.
Concerning the Released Prisoners:
****
We must be cautious not to fall prey to the enemy’s scheme. We released the prisoners for three reasons: to bring lasting peace, taking into consideration the overall situation of the prisoners, and to consolidate our victory.
In a conflict among brothers, there is no such thing as a total triumph. When one party wins a combat while the other party is momentarily defeated, this is known as temporary victory. In turn, the defeated party would resurrect and assault.
As a result, true triumph necessitates victory in the realm of peace. This decision has greatly helped Ethiopia. We must not compromise on decisions for the lasting good of the country.
Negotiation
****
“There has been no negotiation so yet. This does not rule out the possibility of discussions. Negotiation is a method of identifying problem-solving options. We have been betrayed in the process of winning the war and making efforts to rebuild acknowledging that the region is also part of our country. We did everything we could to make peace a possibility. Negotiation is the upcoming all-inclusive national consultation. The Commissioners of the newly constituted National Dialogue Commission have simply been given the task of coming up with proposals; the Ethiopian people will make the final decisions. However, we should not be a country that remains in odds with the concept of consultation and dialogue.”
Regarding OLF/Shene:
****
Although security forces are deployed throughout the area, Shene avoids engaging in direct combat but rather slaughters innocent people. We need to approach the communities that keep them in hiding, hold discussions and work out solutions.
Regarding Special Forces:
****
Every region needs police forces. As a result, developing and implementing standard operational procedures for training and practice is the best option. We need to work out a way to maintain the balance so that our country is benefited.
Regarding engagement of competing parties:
****
It’s crucial to keep in mind that they have a say in cabinet and government decisions which will continue extensively. The national consultation process will also enable conducive context for further collaboration.
On the statutes, charter, and constitution of our country
****
Much research, discussion, and decision-making is required which will take place going forward.
Citizens who have given their lives in the service of their country have received the highest reward in the strengthening of their country. However, it would be unimaginable to leave these heroes behind as we go on.
Regarding the Drought:
****
Humanitarian assistance in giving access to nutritious food & immunizations served as a short-term remedy that. Cattle have been severely harmed. Water conservation, market links, and broad cloud seeding are among our long-term alternatives.
Regarding the GERD & the Red Sea:
****
We want to collaborate with Egypt and Sudan. As promised, we are generating energy and releasing pure water. The water from Abbay is available to all three countries. We are ready as long as there is a solution that benefits all of us.
Ethiopia should not be the sole country to encourage the signing and implementation of the CFA with the lower riparian countries. For their own benefit, all countries are compelled to join.
Diplomacy & Deployment:
****
Diplomats are appointed & not employed. As promised, we are implementing new trainings & practices. Many of our military diplomats will be supporting the defense forces from wherever they are stationed.
Regarding Citizens in Saudi:
****
The challenge for the GoE is the large number of illegal immigrants. There are also reports of mercenaries. The necessary research will be done to separate our citizens from the culprits & repatriate them. 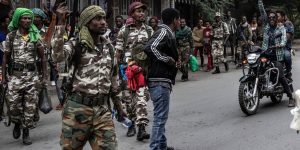 The Prime Minister Abiy Ahmed, presented part one of his remarks to members of the ...read more