Worryingly, refugees in Sudan have told the media that Ethiopian forces near the border are impeding people from leaving. Reporters from  have seen that crossings have slowed to a trickle in recent days. Ethiopia’s government has not commented on that.

Near the Ethiopian border, where 43,000 refugees from Ethiopia Tigray region have arrived so far. Sudan once again has upheld its traditional hospitality to people in need — and urgently requires international assistance to support its efforts.

On Wednesday our reporter saw at least a dozen soldiers stationed on the hills across the river. The refugees identified them as Ethiopian federal forces and said they had been stopping people crossing into Sudan.” Access to humanitarian assistance should not depend on or be organized by parties to the conflict! Ethiopian government wants efforts to be coordinated by the Ministry of Peace, the same ministry that is mobilising for war on Tigray, is unacceptable. Open humanitarian corridors to international agencies!

However, there is an imminent danger posing! , Abiy Ahmed is not happy with the refugees telling their stories to the world, stories of agonies inflicted by Abiy’s forces under the cover of a full blackout.

The junta of Abiy Ahmed has been begging for help from foreign forces to help him on the genocide against Tigreans. Beside the junta’s Ethiopian National Defense Forces, other Ethiopia regional security forces and militias from Eritrea, UAE, and Somalia are actively engaged. With evidence mounting of atrocities committed by both sides in Ethiopia Tigray province, it’s essential to send in international investigators now, make clear that perpetrators will be brought to justice, and stop arming forces that commit atrocities.

We need international investigators ASAP. The government is full of lies and failed to protect civilians. They are busy spreading hate speech, and discrimination. They don’t even bother to investigate any crime with in the country they blindly blame Tigrayans for everything.

We need independent International investigation which doesn’t include both parties in whatsoever.Then the truth will come out.And we need also communication service to be opened in Tigray there is a lot of evidence there.

With refugees pouring into Sudan , Ethiopian regime is planning to invade the enclave with at least 5 million residents, which would be a bloodbath.

Ethiopian Prime Minister Abiy Ahmed again ruled out dialogue with the leaders of the defiant Tigray region Friday but said he was willing to speak to representatives “operating legally” there during his meeting with three African Union special envoys trying to end the deadly conflict between federal troops and the region’s forces.

The meeting came as more people fled Tigray’s capital city ahead of a promised “final phase” of the army’s offensive. Meanwhile, the number of people managing to cross the border into Sudan has slowed to a trickle, raising concerns they are being blocked from leaving. Eritrean dictator’s army is interfering and Fighting inside Tigray State they killed innocent Tigrayans in the cities of Adigrat, Shire, Mai-Kadra, Humera, zalambessa and Alamata cities.

The Nobel Peace Prize-winning prime minister, who has resisted international mediation as “interference,” said he appreciated the AU envoys’ “elderly concern” but told them his government’s failure to enforce the rule of law in Tigray would “nurture a culture of impunity with devastating cost to the survival of the country,” according to his office. Abiy’s government and the regional one run by the Tigray People’s Liberation Front each consider the other illegitimate.

“Not possible,” senior Ethiopian official Redwan Hussein said in a message. “Above all, TPLF leadership is still at large.” He called reports that the TPLF had appointed an envoy to discuss an immediate cease-fire with the international community “masquerading.”

Fighting reportedly remained well outside the Tigray capital of Mekele, a densely populated city of a half-million people who have been warned by the Ethiopian government that they will be shown “no mercy” if they don’t distance themselves from the region’s leaders.

Tigray has been almost entirely cut off from the outside world since Nov. 4, when Abiy announced a military offensive in response to a TPLF attack on a military base. That makes it difficult to verify claims about the fighting, but humanitarians have said at least hundreds of people have been killed.

The fighting threatens to destabilise Ethiopia, which has been described as the linchpin of the strategic Horn of Africa.

With transport links cut, food and other supplies are running out in Tigray, home to 6 million people, and the United Nations has asked for immediate and unimpeded access for aid. Multiple crises are growing. More than 40,000 refugees have fled for Sudan, where people struggle to give them food, shelter and care. One humanitarian agency says hospitals in Tigray are running out of drugs. And fighting near camps of Eritrean refugees in northern Ethiopia has put them in the line of fire.

Worryingly, refugees in Sudan have told the media that Ethiopian forces near the border are impeding people from leaving. Reporters from  have seen that crossings have slowed to a trickle in recent days. Ethiopia’s government has not commented on that.

Nearly half of the refugees are children. The spread of COVID-19 is just one concern.

“We cannot keep social distancing here in the camp,” said Mohammed Rafik Nasri, from the U.N. refugee agency. “It is really challenging among the several issues in need that are growing because the number is growing. Today we are receiving a convoy of 1,000 arriving in the camp. And shelter is one of the biggest challenges that we have at the moment.”

Scared, sometimes without word of loved ones left behind, the refugees continue to share horrific accounts of the fighting.

“The country has no peace. You see one tribe killing another. It is so hard,” said one, Atsbaha Gtsadik. Meanwhile, some of the tens of thousands of refugees from Eritrea who are living in northern Ethiopia have been in the line of fire as fighting sweeps by them.

“Reports of conflicts around refugee camps are very concerning,” said Juliette Stevenson, a spokeswoman with the U.N. refugee agency. Communications and transport restrictions make it impossible to verify camp conditions, she said.

But the 96,000 Eritrean refugees “will run out of food as soon as Monday if supplies cannot reach them,” the agency said in a statement. The International Committee for the Red Cross, in a rare dispatch from inside Tigray, warned that healthcare facilities are running out of drugs and other supplies and health workers need help caring for the wounded.

While traveling in western Tigray, the ICRC found a number of displaced people living in a makeshift camp without food, water or medical care. “They told us they feared for their lives, and that they wanted safe passage out of the area.”

Its statement added: “So much is still unknown on the level of violence and subsequent suffering that people in the Tigray region have endured in just three weeks.” 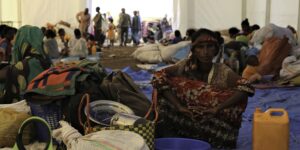