The National Election Board of Ethiopia (NEBE) has been holding multiple consultation meetings with political parties and other stakeholders regarding various operational activities since the release of the timetable for the 6th General Election. Today at 4:30 pm, there will be a press conference regarding the printing of ballot papers and other technical issues which are conducted according to the schedule on the timetable. The press conference will be held at De Leopol Hotel (next to Bambis supermarket) and is open to all media who fulfil the below requirements:
• The media is expected to be accredited by the Ethiopian Media Authority.
• The journalist is expected to have the accreditation badge provided by the NEBE.
• Only two persons from one media, that includes one reporter and one cameraperson. However, only one candidate will be elected at all polling stations nationwide on the ballot paper of the House of People’s Representatives. Therefore, ballot papers marked more than once will be invalid. To All Constituency Officers
It is known that you are in the process of giving out accreditation badges to party representatives/agents for the general election to be held on Monday, June 21st. Given the short time available, we recommend that you complete the issuance of badges by tomorrow night, June 20, 2021. A few guidelines for applying during voting season.
Laws should be implemented when voting or when it’s from the entrance.
For the political parties • It is not allowed to do any obstacle that stops voters from their entry-level or impacts their voters.
• It is prohibited to influence voters during voting time.
• It is prohibited to make campaign moves during voting and distributing campaign materials and wearing party signs.
• Don’t call demonstrations on the day related to the election or the people’s decision
• Voters are not allowed to conduct social media campaigns that determine who and how voters vote
• You can remind people that it’s voting day to help them get to the voting place. You don’t have to influence how to vote. The Board would like to take this opportunity to inform the security forces responsible for improving the security situation during the polling day due to security concerns.
2. It is to be recalled that the Board stated that there were problems with the ballot papers of 54 constituencies and was consulting with the parties to discuss alternative solutions. Among these constituencies, the number of polling stations that have problems with voting is now 27. Accordingly, voting in these 27 State and House of Representatives constituencies will be held on September 1, 2013. The National Electoral Board of Ethiopia (NEBE) would like to thank Ethiopian Airlines for its significant and unique cooperation in transporting ballot papers.
3. It is to be recalled that the voter registration in the Somali region has been completed in 14 constituencies. In addition, the Board has decided to hold the voting on May 1, 2013, as one of the regions most affected by the re-printing of ballot papers is the Somali Regional State. Prior to that, it will finalize and publicize issues related to voter registration.
4. The referendum in southwestern Ethiopia is scheduled to take place on June 14, but the referendum will be held in other constituencies due to security concerns. ይሆናል It will be held on May 01, 2013. 5. The voter registration verification process has been completed and the number of registered voters for the 6th national election has reached 37.4 million. The Chairperson of the Board, Birtukan Mideksa, said in her report that political parties submitted their complaints about the number of candidates during the financial support allocation based on the number of candidates. Following the complaints, Birtukan said that the Board compared the Result Reconciliation Form (RRF) with the ballot papers and found out that there are some inconsistences The Chairperson of the Board presented the administrative measures taken by the Board to address the problem, highlighted the problem of printing ballot papers in these constituencies and the general implications in packing and distribution, and asked parties for their comments on the issue.
After explaining that such problems occur at times, some parties asked about the possibilities of printing the ballots locally while others suggested holding the election for the above constituencies with those that were previously extended due to security concerns. Accordingly, the Board explained that there are two options to solve this problem. One is printing the ballots locally and the second option is holding the election for the above constituencies where voting wouldn’t take place on June 21 due to security concerns. The Chairperson also added that voting will take place as planned on June 21 and the Board will continue to provide additional information to parties and voters. he Ethiopian National Election Board has discussed with stakeholders on the study they studied on ...read more 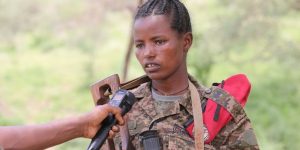 Press Statement on the Suspension of Ethiopia from AGOA Eligibility he Government of Ethiopia understands the ...read more 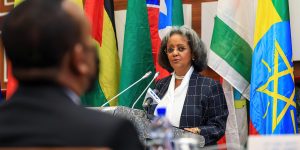 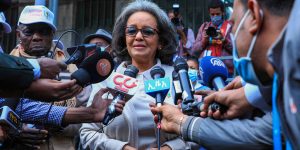