A fishery project built by the Ministry of Innovation and Technology and Gambela National Regional Government has been inaugurated.
The project has been inaugurated by the innovation and technology minister Belete Mola (PHD).
Dr. Belete pointed out that Ethiopia has a rich natural lakes and rivers, and from the main sources of fish – lakes 39, 262 tons, reservoirs and dams 7879 tons, small water bodies 25,996 tons, rivers 21405, the total fish resources per year is 94,541 tons.
Dr. Belete, who pointed out that there was a limit in order to make sure that this resource is useful by technology and changing it to social and economic wealth, a lot of work is expected to be done to ensure the benefit of the project.
Considering the limitations of Gambela’s natural resource project, the Ministry of Innovation and Technology, Gambela Regional Government, Gambela University and the Ministry of Agriculture together implemented this project in Gambela city, Itang special district, Abobo district, Abobo city. Even though this project has been started earlier, it has a key role in achieving the “Lemat profit” program that started last month.
Dr. Belete, who explained that ‘Lemat Profit’ is a program that focuses on ensuring food and food system insurance, increasing the income of foreign trade and replacing foreign products in the country in line with the goal of this project.
When this project was being studied, the main objective was to support the region’s fishery resource and asset chain with modern technologies and to improve the life of the community. In order to achieve this, we need to develop the state’s resources by developing transportation, organizing and marketing technologies.
Secondly, by establishing a regional fishing and farming centre and a fishery resource knowledge centre to ensure the longevity and productivity of the resources.
He explained that the third place was to create employment opportunities for the youth and women of the region and to ensure food security and to reduce foreign exchange expenses and to achieve the goals of producing foreign market products.
Dr. Belete, who appreciated the project’s success by overcoming many man-made and natural problems in order to achieve its goals, he said that attention should be worked on for the success, continuity and reliability of the project.
The president of Gambela people’s national region, Mr. Umod Ujulu said that the fish market and the shopping centre will reduce the shortage of fish products in the country and abroad.
He pointed out that there are more than 113 fish species in the region’s water resources and 15 of them are highly demanded species on the market. takeholders who played a significant role through transporting soil fertilizers have got recognition today. Opening the ...read more 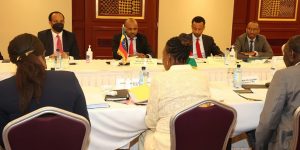 thiopia will host the 36 congress of the International Union of Leather Technologists and chemists ...read more